Long-read sequencing presents unique opportunities to expand the diagnostic potential of sequencing, particularly in cancer and rare disease. But there are challenges, including around accuracy and throughput

Long-read sequencing (LRS) is attracting growing attention from the clinical genomics community, because research is increasingly demonstrating that LRS is better able to identify certain categories of genetic variant. This presents unique opportunities to expand the diagnostic potential of sequencing and to enable an ‘omics approach due to the epigenomic and RNA sequencing that is possible using LRS (see Clinical Long-Read Sequencing). Current LRS technologies have additional technical characteristics of interest for clinical applications, for example, Oxford Nanopore Technologies can be used for real-time sequencing.

The use of long-read sequencing is being explored across a range of cancer and rare disease applications. This briefing will discuss some of the opportunities for LRS in clinical genomics, what this might mean for patients, and considerations relevant to implementation of these technologies.

Missing diagnoses in rare disease can arise because there is limited evidence available with which to interpret the test findings, resulting in the reporting of variants of uncertain significance (VUS), or no candidate variants being identified. LRS can be used to improve this diagnostic process in a complementary manner by: 1) validating previous findings; 2) further characterising complex variants; and 3) identifying new diagnoses.

Missing diagnoses in rare disease are often caused by what is called the ‘n of 1’ challenge, where there is insufficient evidence to determine the pathogenicity of a specific rare variant/s found in a single individual. LRS will not be able to overcome this challenge. Improving the diagnostic process will be driven by the identification of new disease genes, data sharing, further study (i.e. functional analysis) and reanalysis with new evidence – some of which may be provided by LRS.

There is strong evidence that identifying structural variants (SV) will result in new diagnoses. A recent diagnostic study found that 13% of diagnoses came from SV, and current estimates suggest that >34% of known disease-causing variants are larger than 1bp [1]. Larger changes in DNA caused by SV are more likely to disrupt or change gene expression leading to disease. LRS improves our ability to identify larger and more complex variants.

The biggest success using LRS in diagnostic discovery studies has been untangling complex variants. These variants can be identified using cytogenetic techniques – laboratory methods to identify chromosomal changes including broken, missing, rearranged, or extra chromosomes. These methods are not as sensitive as sequencing technologies. LRS can be used to identify all affected genes, providing additional information to understand patient phenotypes and guide clinical management. For example, LRS was used to reclassify a very large chromosomal rearrangement in a patient affecting twelve genes, eleven of which were missed in previous genetic testing [2]. Two genes were associated with cardiac diseases and this link resulted in further investigations and follow-up care.

Interpreting variants: the role of inheritance

Trio sequencing, where a patient and both their parents are sequenced, is used as a tool to determine the inheritance pattern of variants and their role in disease. However, trio sequencing may not always be possible (e.g. for adopted patients) making it harder to interpret the role of a variant in a disease. For example, compound heterozygous inheritance is where the presence of two different variants in the same gene (or allele), one inherited from each parent, result in disease. This is different from autosomal recessive disease, where the same gene variant is present in both alleles. LRS can be used to resolve the inheritance pattern of variants by identifying if they are located on the same or different copies of the gene. This process is known as haplotype phasing, and is a key advantage of LRS over SRS, where these reads are often too short to confirm the relative location of variants.

For example, a recent evaluation of whole genome sequencing for prenatal diagnostics in Hong Kong explored LRS to complement this diagnostic process [3]. In one case, SRS identified a frameshift variant in the gene PCNT compatible with clinical presentation, but the mechanism of disease for this gene is known to be autosomal recessive. One further breakpoint was identified in PCNT, hypothesised to be caused by a de novo inversion disrupting the second allele. However, these variants were 20kb apart. Therefore, LRS was combined with SRS to identify the inversion breakpoints and to confirm these two variants were both located in different copies of the gene. This resulted in a genetic diagnosis of microcephalic osteodysplastic primordial dwarfism type II. Importantly, this inversion was de novo and, therefore, the family could be counselled that it was unlikely that further children would be affected.

The challenge: a complex landscape

The cancer testing landscape is complex, with different types of tests required at each stage of a patient’s care pathway for clinical decision-making. Multiple assay platforms are used to provide these cancer diagnostics. There is more limited evidence for using SRS to identify known drivers (e.g., BCR-ABL translocations in CML) identified using cytogenetic or targeted genetic testing. These layers of testing all add to the challenge of getting the right test to the right patient at the right time.

LRS has key advantages over SRS because it can: 1) reduce ambiguity when reconstructing complex cancer genomes; 2) expand the use of epigenomic and RNA sequencing; and 3) simplify workflows. LRS can detect a broad range of variation and could, in principle, replace multiple technologies. LRS can also be performed in real-time, reducing the need for batching of samples, which has a number of advantages, such as, utilising fresh or fresh-frozen samples or in time-sensitive scenarios.

LRS makes it easier to detect gene fusion events that are prevalent in many cancers. For example, chronic myeloid leukaemia is characterised by a specific fusion protein (BCR-ABL) and can be treated using targeted therapies. LRS can be used to test for this translocation and is more sensitive for identifying SV associated with treatment resistance compared to SRS methods [4]. LRS could improve diagnosis and monitoring for resistance caused by structural variants.

Cancer diagnostics is increasingly making use of epigenomic and transcriptomic tests to provide clinically significant information. LRS can detect DNA modifications alongside sequence data, improving the sensitivity of cancer diagnostic tests that may be affected by the clonal nature of cancer genomes. LRS can sequence entire RNA sequences, and this can be used to detect changes in gene expression or to identify fusion proteins (e.g. BCR-ABL or ETV6-NTRK3) sensitive to targeted cancer therapies.

Looking to the future: single-molecule sequencing 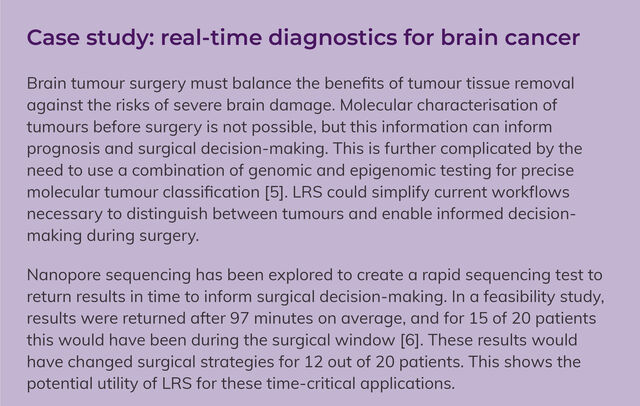 In addition to these considerations, LRS technologies have some unique characteristics which may make them more suitable to certain settings.

Ultimately, many of the considerations for adoption of LRS will be similar for any sequencing technology. Decisions as to which platform is most appropriate for a particular purpose and setting will be a trade-off between the specific technological capabilities of the sequencing approach and the diagnostic purpose.

Evidence for the value of LRS in clinical genomics is growing. LRS presents wide-ranging opportunities not restricted to any one application. Therefore, the question is not “will LRS be useful?” but rather, “how, where and when will LRS be useful?” Barriers remain to implementation of LRS systems and therefore adoption of these technologies needs to consider appropriate robust validation where LRS may provide the greatest value.

We thank the WYNG Foundation for generously supporting this work.

Views expressed in these documents do not necessarily reflect those of the WYNG Foundation.