Lung cancer is the second most common cancer in the UK after breast cancer. However, while breast cancer survival has improved in recent years, with 80% of patients surviving more than 10 years post diagnosis, for lung cancer the figure is only 5%. New therapies have improved treatment options for some patients, but genetic tests are needed to prescribe these. Circulating tumour (ct) DNA testing (sometimes dubbed ‘liquid biopsy’) is being offered to improve access to these therapies. What needs to be done to support implementation of ctDNA testing in this group and how can all patients access these services?

For advanced NSCLC patients who have tumours with mutations in the EGFR gene, a class of drugs called tyrosine kinase inhibitors (TKIs) can improve progression free survival, compared to treatment with standard chemotherapy. Prescribing TKIs to patients without mutations in the EGFR gene has been shown not to be beneficial, and so tests to accurately identify patients with and without EGFR tumour mutations are an important part of cancer care for this population. In England, the National Institute for Health and Care Excellence (NICE) recommends that TKIs are only prescribed to patients who have a positive genetic test result for EGFR mutations in their tumours. However, in up to 40% of advanced or metastatic NSCLC patients this genetic test cannot be performed, either because the biopsy of their tumour yields insufficient tumour material, or because a biopsy cannot be performed due to the inaccessible location of the tumour or the health status of the patient. ctDNA testing provides an alternative route for these patients to have their tumour genetically tested, offering them the opportunity to be considered for TKI treatment if the result is positive.

ctDNA testing for EGFR status in NSCLC is currently available in a small number of NHS laboratories in England and Wales. The techniques have been validated and are being used by clinicians to enable previously ineligible patients to receive TKI therapy.

What are the advantages of ctDNA testing in non-small cell lung cancer?

Liquid biopsy (i.e. when ctDNA is extracted from a blood sample and analysed) is a less invasive medical procedure than a solid tumour biopsy, which in lung cancer patients carries some risks, such as lung collapse. Blood tests can also be carried out more frequently throughout treatment, for example to monitor treatment response, or to detect the emergence of resistance to therapy. Patients who require a test to check for the emergence of a resistance mutation to first-line TKIs can have a ctDNA test in the first instance. A solid tumour test is only considered if the liquid biopsy fails.

Liquid biopsy improves patient access to genetic testing and optimises the number of patients who could receive therapies that are better suited to treating their tumours.

Liquid biopsy results could, in principle, be obtained faster than solid tumour results, as samples do not need to be sent to a pathology laboratory for processing like solid tumour samples, but could be sent directly to the genetics laboratory. Patients also do not need to wait for a specialist appointment as blood samples can be taken quickly during regular appointments.

The ctDNA tests currently in use only detect a defined set of clinically relevant mutations in the EGFR gene. They do not for example detect mutations in other genes that could also have an impact on treatment selection or efficiency.

Some patients’ tumours may not release enough DNA into the blood to give a reliable result for ctDNA testing. Also, ctDNA testing methods currently in use may not be sensitive enough to give a definitive result in some cases.

Not for primary diagnosis

ctDNA testing is only effective in patients who have already been diagnosed with lung cancer using other methods. It currently cannot be used for diagnosis or to determine other clinical information about the lung cancer, such as subtype. However, a tumour may contain groups of genetically distinct cells: ctDNA can capture this variation (heterogeneity) that could be missed by a solid biopsy from a single site.

There are around 46,000 cases of lung cancer diagnosed per year in the UK. Of these, around 12,000 have the subtype of advanced NSCLC eligible for testing to determine whether TKIs are a useful treatment. 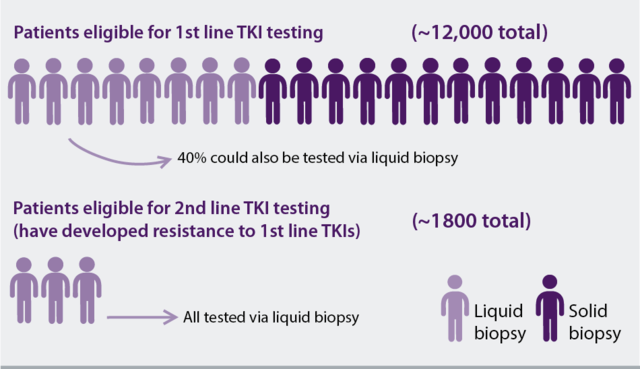 What needs to be done to support existing services and expand testing provision such that it is available to all eligible patients regardless of where they live?

ctDNA testing for EGFR is clinically useful and addresses an unmet need for patients with advanced NSCLC. While testing currently only benefits a small number of patients, if should be possible to make ctDNA testing routinely available for all eligible NSCLC patients across the NHS. In the future, it is also likely that testing will expand to other cancers and to different parts of the care pathway. Therefore it is important that we learn from the experiences of early adopters of this technology if we are to efficiently and equitably expand services. We held a workshop in Spring 2017 to learn from and share the experiences of the pioneers of this new approach to cancer management.